a guide to hacking together on the distributed web

If you're curious about the distributed web, and the prospect of using git collaboratively without a central, closed-source point of origin, you came to the right place!

git-ssb is a great fit for just this. This guide tries to act as a transition aide for GitHub users into the world of git-ssb. It assumes rudimentary knowledge of GitHub. It will walk through: 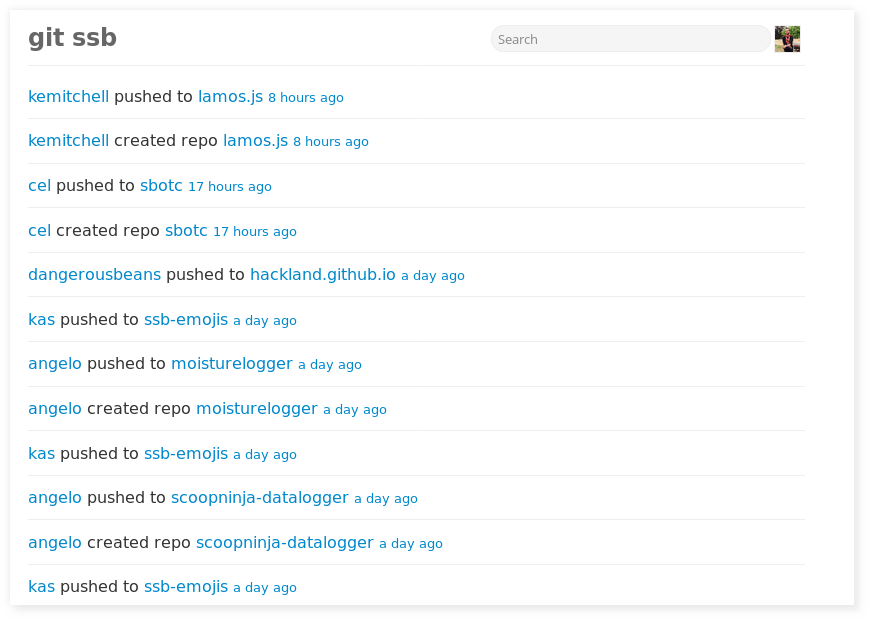 A view of recent activity among my friends on git-ssb

SSB stands for secure scuttlebutt, the database/protocol that powers the peer-to-peer log store scuttlebutt. There is a great deal of information to be found by reading these sites, if you're so inclined.

If you're familiar with bitcoin or blockchains, SSB is akin to having your own personal blockchain: you can append messages of any kind, with any data you'd like. Unlike bitcoin, there's no money involved: it's just a data structure on your local machine.

Your personal log can only be appended to, and is cryptographically secure: each message references the hash of the message that came before it. The whole thing is then also signed by your public key, making it both tamper-proof, and appendable only by the private key holder (you).

The final piece of SSB that makes it all work is the gossip protocol: when you run scuttlebutt, you become a peer in a network of other scuttlebutt users. You can choose to 'follow' other people's personal logs. As a result, whenever you see that user (or any user that follows that user too) online, you can retrieve their latest log entries from them. All without any central server or central authentication.

git-ssb builds on top of this: things like commits, branches, issues, and pull requests are encoded into log entries on each participant's personal log, while the gossip protocol runs in the background and propagates new content to everyone involved in the git repository.

If you're already up and running on Patchwork (or another client), you can skip to step 3.

You can install node and npm..

Any SSB node should do; there are several implementations. Below we will focus on two of the most popular.

Whichever you choose, make sure you get an invite code from a pub to increase your ability to find other scuttlers.

Patchwork is an easy and user-friendly client that's nice to start your SSB experience with, if you're new. Follow the instructions on the main page at https://scuttlebutt.nz

If you're looking for a 'headless'/CLI node to provide SSB services, follow the next section.

The ssb-server is a local secure scuttlebutt server which will manage replicating data with other peers.

All of the dependencies for git-ssb and git-ssb itself live on the SSB network. To access them, we'll need to install ssb-npm:

If this doesn't work (or you aren't following enough people) you can fetch the blob from a centralized source too:

If you have problems with the above commands you may need to follow different people, so that you can find all the dependencies. cel is a good bet.

git-ssb is primarily the work of cel, and comes in the form of a command-line program not unlike git or GitHub's hub.

Let's use npm to install git-ssb globally so we can use it in the command-line:

You can now run git-ssb (or git ssb) from the command line and get a feel for the sorts of things it can do.

NOTE - git-ssb needs an SSB node to work with. You must ensure Patchwork, ssb-server, or simiar is running when executing git-ssb commands.

If you've already joined the SSB network successfully, you can take a look at what other hackers on SSB are working on! Run git-ssb web and point your web browser at the URL it outputs. (Remember you need to be running ssb-server or Patchwork.)

You'll see that it's not dissimilar from GitHub: git-ssb-web
lets you see commit activity, view repositories, browse commit history, see issues and pull requests. All without a centralized authority.

There are at least a few public git-ssb web servers run by the community, for browsing git-ssb content without running your own ssb-server:

git-ssb makes ssb-server act like a git remote. Navigate to an existing git repository of yours and run

This will create a new git repo on SSB. The command will output something that looks like

The string %DEvlJYD+zuudMyNWFBjiiNvZ8DbOyBYhCkE5EVtWSV0=.sha256 is a hash that uniquely identifies your git-ssb repository. To see this in action, you can navigate to (for example) ~/projects and run

and you'll see that ~/projects/my-repo now exists. git-ssb talked to your local ssb-server server and pulled down the entire git repository.

In fact, you can also view your handiwork by running git-ssb web and opening your browser: you'll see your brand new repo near the top of the activity list and can browse it like you might've on GitHub.

If you're reading this article, then you've already found one SSB git repository: this one! Let's create a fork, make some changes, and send a pull request:

Let's look at the help with git-ssb fork --help:

since we just did a fresh git clone, the remote to the original repo is origin; you can type git remote -v and have a look. since origin (or ssb) are the default for forks, you can omit this option.

remote_name is whatever you'd like to call the remote of your fork. I usually call mine noffle-ssb, to indicate that it's a fork remote and that it's my personal one:

Great! Now we can make some changes and commit them. I forgot to add a license to this document, so we can add that, commit, and push:

We can see our fork on the web interface, too! navigate to http://localhost:7718 and you'll see your repo fork.

Let's finally create a pull request with our changes:

this will launch your text editor and let you type in a message. It's good practice to make the first line of your message the subject, and leave two newlines before writing your message. something like

Sure enough, you can now navigate to the from-github-to-git-ssb repo on SSB and see your pull request: http://localhost:7718/%25RPKzL382v2fAia5HuDNHD5kkFdlP7bGvXQApSXqOBwc%3D.sha256/pulls

If you were the owner of the git repo, you could merge this pull request from the command line by pulling down the fork remote and merging:

git-ssb's permissionless model has an interesting consequence: anybody can push to anybody else's git repository. Coming from a GitHub background this probably sounds like madness, but folks on SSB have been using this model with good success. A pull request might look like this:

The nomenclature is to treat the ssb remote as the "true" remote, and work off of a branch called @your-username/master as your own master, emulating a forked repo. This seems to work well: the SSB network thrives off of being a group of kind, respectful folks who don't push to each other's master branch. :)

Since git-ssb allows users to push to the same remote asynchronously, there is a possibility that they will conflict. This is different from a git merge conflict: in this case, there are two (or more) competing HEADs for e.g. master.

Go forth and collaborate!

Well done, and welcome to the scuttleverse and the world of distributed social coding! share git-ssb with your friends, and consider managing an SSB remote of your GitHub work, to encourage further growth of the distributed web.

Thanks for reading! please share feedback or questions as issues on this repo, or, if you find any errors in the text, send a pull request.